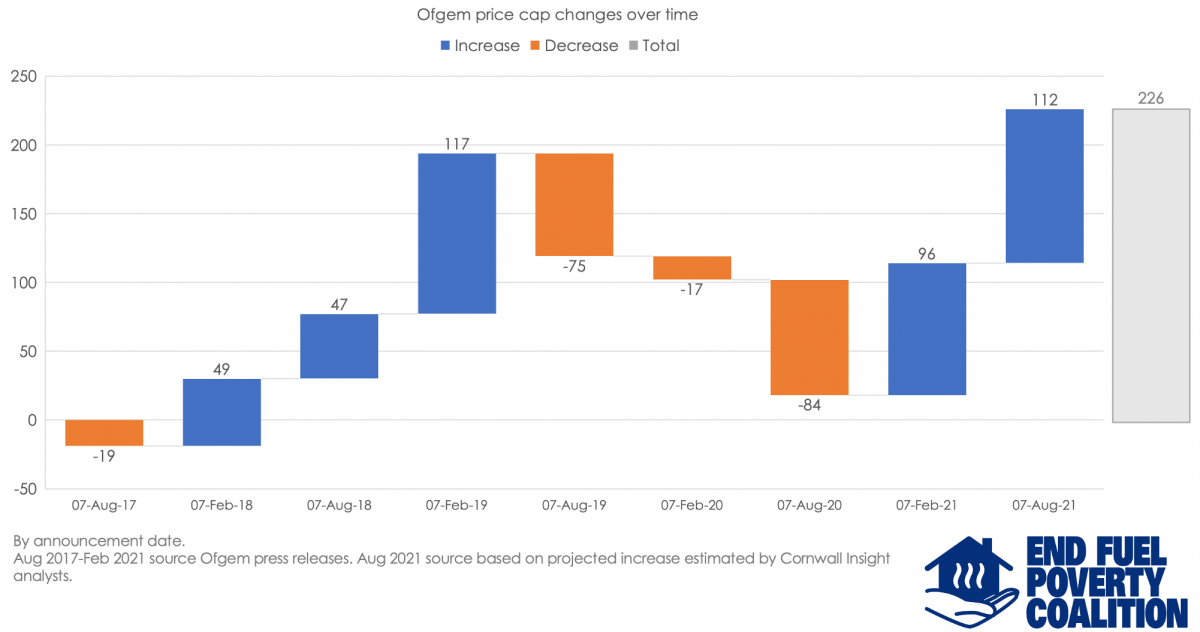 Millions of people across Britain are set to be hit with the highest fuel bills since a price cap was introduced, according to a new analysis of data.

With wholesale prices increasing [1], Ofgem is set to announce an increase in fuel bills as early as 6 August. Around 15m people on default tariffs and pre-payment meters will be affected.

The move, estimated by Cornwall Insight analysts to see bills increase by £112 a year, will hit homes from 1 October [2]. Just as furlough comes to an end and the nation heads into winter. Such a rise would mean bills for homes on a standard variable tariff will be £226 higher than in February 2017. [3]

Calculations by the Coalition, provided to The Guardian, estimate that the price rise will force an additional 392,000 households into fuel poverty. [4] Over 4m people are behind on their household bills and a second Ofgem price cap rise this year will be disastrous for the millions on the brink of fuel poverty.

Any price cap rise will only make matters worse for families struggling to make ends meet. At the same time, people are still reeling from the increases in bills caused by stay at home lockdown measures for the last 18 months.

While people’s attention is diverted by the rush out of lockdown, the reality is that the countdown to winter is on and it is a race against time. Any price rise – however small – will mean the choice between heating or eating becomes even starker later this year.

Short-term energy saving measures and shopping around for cheaper energy can help reduce bills, but the scale of the problem faced by people this year is huge and any increases during the pandemic and the recovery should be avoided.

We’d urge Ofgem and policy makers to think again about the price cap rise, or the Government to step in and provide emergency financial support to those who suffer due to the decision.”

With thousands dying of cold every year the current energy pricing system – complete with price caps – is not fit for purpose.  As prices rise, a carbon tax rebate would help, but won’t solve this.

We need a new pricing framework, where poorer people don’t pay higher rates than the rich.

We need well-insulated housing, renewable energy, and wages and benefits that meet our costs. No special provisions or consumer protection will stop fuel poverty from killing pensioners and wrecking childhoods. The pandemic has taught millions that real change can’t wait.

The price cap is an important measure to ensure that households are not exposed to excess profits in the energy market. However, if prices rise as is expected, Ofgem and Government must work together to help those worst affected by rising utility debt in order to avoid a devastating winter for people in and on the brink of fuel poverty. This must be combined with a long-term boost to spending to improve energy efficiency of buildings.

Without intervention, more people will remain cold at home during the winter, be more susceptible to respiratory illness, and unfortunately many will die. That is a truly unacceptable outcome, especially as the solutions to avoid it are well known.

More than a quarter of Scottish households are living in fuel poverty with many of these households living off the gas grid, dependent on electricity. The anticipated price rises will have a catastrophic effect on struggling households particularly as the job retention scheme ends and the Scottish winter approaches.

Scotland needs a fuel poverty strategy as a matter of urgency to ensure that we are prioritising the homes and families most in need. We must move quickly in order to protect our health service from the additional burden created by cold, damp homes and we must see adequate investment from Scottish Government that will eradicate the national shame that is fuel poverty.

Hundreds of thousands of households in Wales already struggle to keep warm at home. Far too many must ration essentials, cutting back on heating and electric. If these price rises come to bear, people will find it even harder still.

It is vital that the Welsh Government follows through with the promises that it made in its Fuel Poverty Plan to support the worst-affected first; upgrading the energy efficiency of fuel poor homes, maximising incomes, and working with partners, including the UK Government and Ofgem, to protect Welsh households.

[2] Cornwall Insight data from energy analysts forecasts that the price cap on standard and default tariffs will rise in October to around £1,250/yr for a typical dual-fuel household paying by direct debit, up from the current price of £1,138/yr.