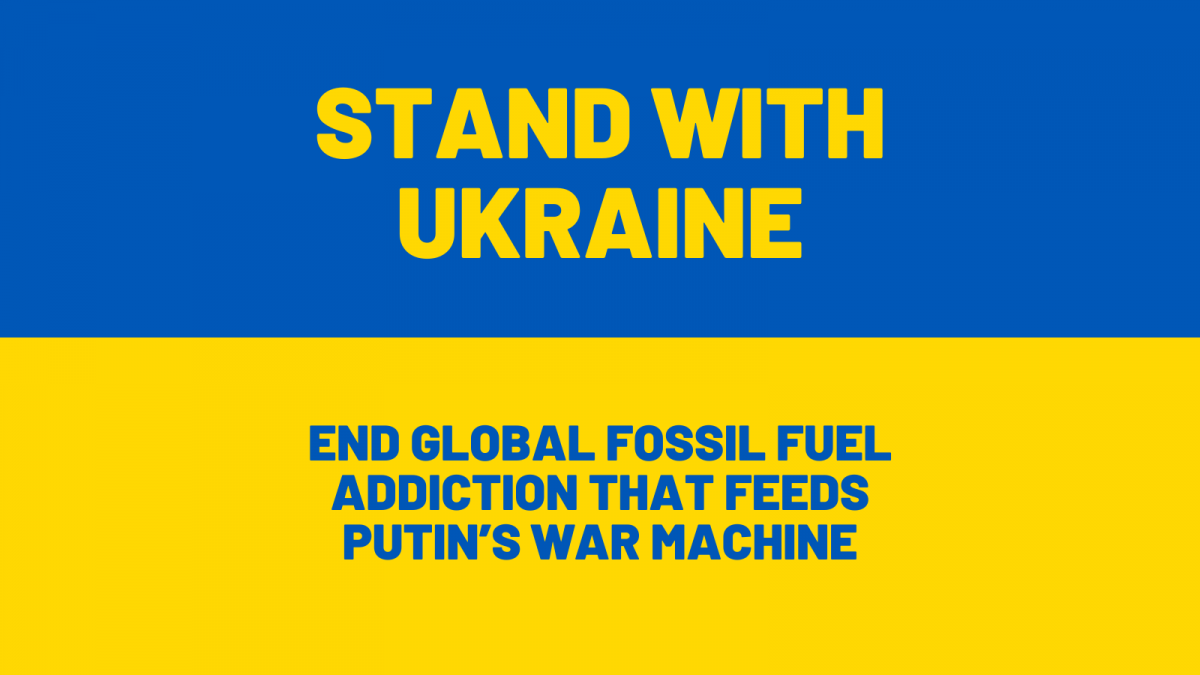 The End Fuel Poverty Coalition has joined hundreds of organisations from dozens of countries in expressing solidarity with the Ukrainian people in a collective call on world governments to end fossil fuel production.

This war is a fight for Ukrainians’ own freedom, but more broadly, a fight for self-determination worldwide.

The letter — initiated by a dozen Ukrainian climate organisations — recognises that this war is a “grave violation of human rights, international law and global peace” fuelled by the oil and gas money that powers Putin’s war machine.

The letter urges governments to use all nonviolent means necessary to stop Putin and his war machine, restore peace, and end this egregious murderous aggression.

Governments must work together to manage transition to a clean and safe renewable energy in a way that is fast and fair.

This also means stopping all trade and ending investment in Gazprom, Rosneft, Transneft, Surgutneftegas, LukOil, Russian Coal and others, seeing a cease to all financial services for Russian energy companies operating in the coal, oil and gas sectors.

Commenting on the crisis, a spokesperson for the End Fuel Poverty Coalition, said:

The invasion of Ukraine is an obscene act of terror by the Russian state.

Our Members have been warning for years that fuel poverty is a social justice crisis, a public health emergency and a national security priority, but the UK Government took little action.

And the solution to fuel poverty does not lie in fossil fuels.

We now need urgent help for households in fuel poverty now combined with a long-term plan to improve energy efficiency of our homes and a sustainable, renewable-led, energy mix.

While any further rises to already sky high energy bills are a huge concern to the millions of people facing fuel poverty, any attempts to push all the responsibility for the energy bills crisis onto the Russian invasion does not give the whole picture.

Any pain which is suffered by the British public as a result of increased energy prices is a political decision by the UK Government.

The Government has talked about this for long enough, but fails to match words with action – the Chancellor’s attempt to provide support for people through a “loans dressed up as grants” scheme is a prime example of this.